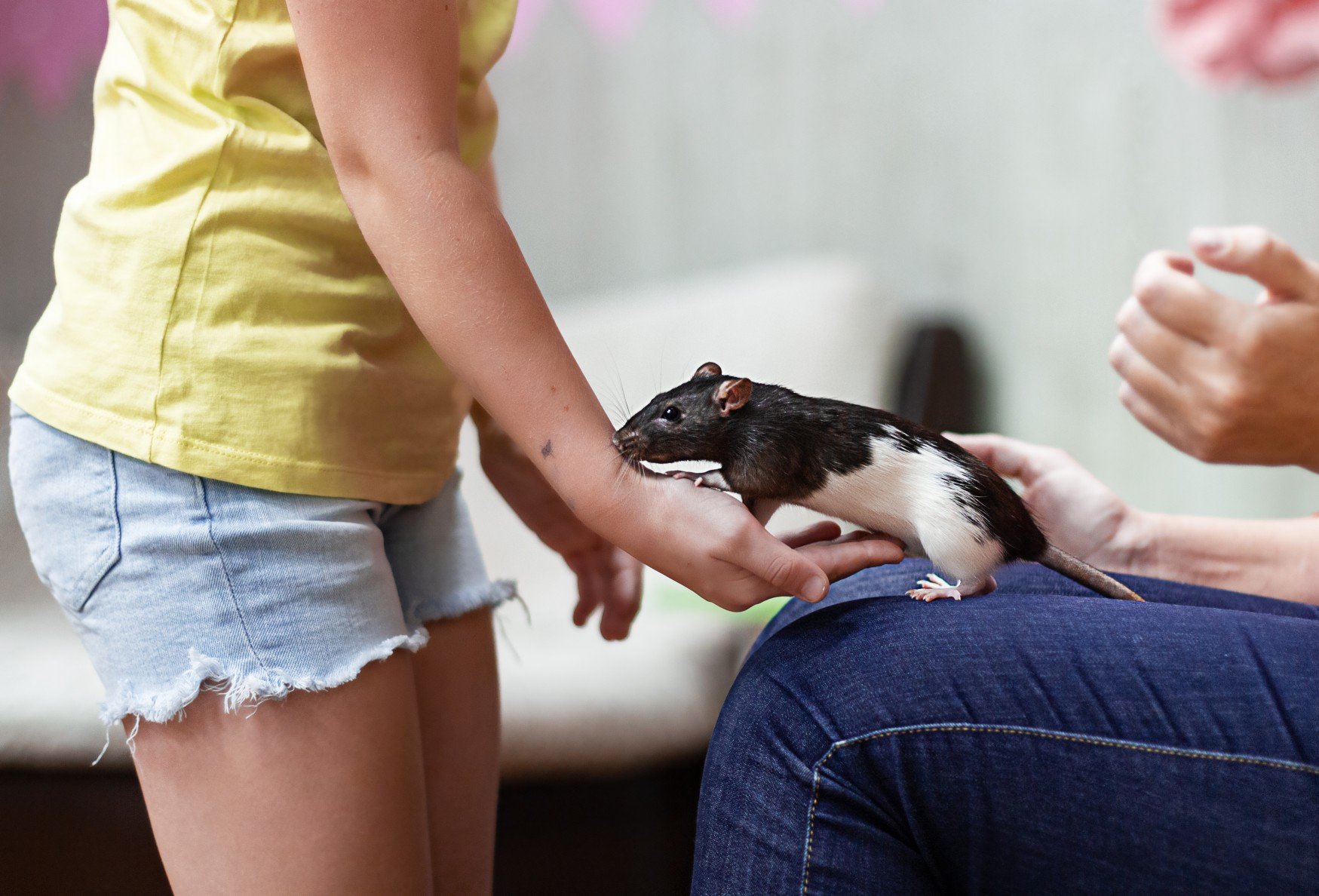 More myths about pet rats stem from the wild rat species than your pet rat type, and it has been an ongoing problem that adds to the stigma of rats. Pet rats have been domesticated for over 170 years and are different than the wild species of rats we see today.

These myths have been held onto for many years. They keep people from realizing the potential of pet rats and how helpful they can be for human beings. Below are just five of the hundreds of myths about pet rats. We hope that our dispelling of these myths inspires you to revisit the idea of having a pet rat.

From fancy rats to Dumbo rats, the options for a pet rat are endless. You can purchase your pet rat from a breeder or a reputable pet shop. Regardless of where you purchased your pet rat, the below myths about pet rats will plague your world until you educate your friends on the truth about pet rats.

1. Rats are mean and vicious

During everyday playtime and interactions, this myth about pet rats being mean is false.

This is another one of our least favorite myths about pet rats. Your pet rat isn’t going to cause disease. There’s this story that wild rats are what caused the Bubonic plague. This plaque was thought to be caused by fleas, not rats.

While the rodents carried infected fleas from city to city and town to town, the rats were not the cause. The people who were infected with the Bubonic plaque were infected through a flea bite. The fleas that live on various rodents were the ultimate cause of the Bubonic plague.

Over time we dispelled this myth about pet rats because it was their fleas, not the rodents that were infected with the plaque.

While pet rats can be dirty, they’re not any dirtier than having a pet cat, hamster, or another animal in the home. One of the easiest ways for us to dispel this myth about pet rats is to remind you that pet rats groom themselves frequently.

Because pet rats spend a lot of time grooming their fur and body, we can confidently dispel the myth about pet rats being dirty.

4. Rats grow as large as cats

This myth about pet rats made us giggle! No, your pet rat isn’t going to grow as large as cats. Although there have been many wild rat photos on the internet, a domesticated pet rat will grow no more than one pound in weight.

Typically pet cats can weigh from 8lbs to 12lbs, thus dispelling the myth that rats grow as large as cats. There are some large wild rats out there, but the reality of your pet rat growing that large is pretty slim to none.

Since pet rats are domesticated and bed for personality as well as size, this myth about pet rats can be easily dispelled.

If you have female pet rats, you may find that they don’t show as much affection as their male counterparts. The male pet rats are lazier and cuddlier than the females, but overall yes, rats show affection.

Your pet rat will love playing with you and running around for a treat. Every pet rat can be taught to perform tricks, with female pet rats being more interested in such feats. The male rats will cuddle with you and give you nose kisses if you spend quality time with them.

Pet rats are just as affectionate as other pets in your home because they are social animals and need that connection with their owners, thus dispelling this myth about pet rats not being affectionate.

Never judge a book by its cover

The various myths about pet rats out there are hard to understand. The myth that pet rats don’t show affection or pet rats are mean, along with the ridiculous myth that pet rats grow as large as cats, are enough to slow down the average person from buying a pet rat.

We wanted to dispel these types of myths about pet rats so that you could see the benefits of owning such a furry friend. Pet rats are easily trained, tend to be food motivated, live in a cage, and have silly behaviors like ferrets. They love to play and run around.

Pet rats are nocturnal, but if you purchased your pet rat from a pet store, their sleeping patterns might be slightly different from that of a pet rat you bought from a breeder. These are just some of the many myths about pet rats out there we had to dispel. We want you to see the fantastic benefits of being a pet rat owner and how wonderful these pets can be.